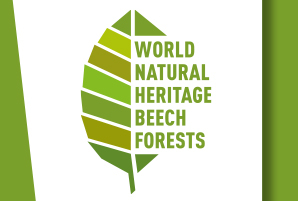 The Kalkalpen National Park can be described as the largest connected protected area with a significantly high proportion of old beech stocks in the beech distribution area of the Alps. The most valuable of these beech forests – around 5,250 ha – were suggested as World Natural Heritage sites. This area extends over an altitude amplitude from 396 to 1,963 metres above sea level.

The diversity of geological source rocks, the great variety of soil types, as well as the different terrain formations and the high altitude amplitude (submontane to high subalpine) are mainly responsible for the high diversity of habitats and the high numbers of different biotope types. The beech forests that occur cover the typical beech forest spectrum of the area.

Due to the high relief energy, the meteorological conditions and the high naturalness, a multitude of complex and highly dynamic processes take place in the area. Because of the characteristic high precipitation in winter the effects of the snowfall become visible in many places: Avalanches keep tearing swaths into the forest landscape. In addition to avalanches, storms and windthrows, floods, fire and zoological mass reproduction such as the spruce bark beetle also act as impulse of dynamic processes. Ecosystems with remarkably high natural dynamics, such as avalanche corridors or dumps, are highly adapted to the “disturbance”. Rapid regeneration is part of the natural survival strategy here. As an adaptation to the mechanical stress, beech and other tree species in Avalanche corridors as well as in locations with extreme snow loads in winter form the typical sabre growth which is visible in many places in the National Park.

Another unique characteristic of the Kalkalpen National Park is the common occurrence of beech and larch within a stock. This type of stock forms the forest line in some places on the steep northern side of the Sengsengebirge. While beech is known as the indicator species of a humid moderate climate, larch has its main area of distribution in the subalpine area of the continental inner Alps. Due to the constant disturbance caused by avalanches and snow gliding, these beech stocks remain in their development and do not go beyond the existing succession stage, which is characterised by larch. This joint appearance of different ecologically and biogeographically elements can be clearly described as a unique characteristic for the Limestone Alps.

The high integrity of the suggested beech forests is mainly due to the closeness to nature of the forests. An evaluation indicates that 26 % of the forests can be described as natural and 50 % as near-natural. Because of the very high age of some populations, the inaccessibility in some areas and the knowledge about the history of utilization, it can be assumed that some remainders have never been used. Therefore, these untouched parts of forests can be described as primeval forests. Dendroecological researches at three of these primeval forest locations showed an average tree age of 250 to 304 years. The highlight was the discovery of a 546 year old beech, which is considered to be the oldest beech in the Alps and continental Europe.

The high population densities of the white-backed woodpecker (110 to 130 breeding pairs) in the area, as well as the evidence of 21 primeval forest relic beetle species underline the high integrity of the forests.

The Large area here has to be emphasised as a criterion for integrity as well: 5,250 ha of high-quality beech forests, embedded in a buffer zone of 14,197 ha (almost the entire remaining National Park area), are to be classified as considerable in view of the historical pressure of use.

Contribution of the Kalkalpen National Park to the serial World Natural Natural Heritage:

Integrity is proven by